Haven’t done a race in two years.
With not a lot of consistency in training and lots of other things going on I couldn’t expect to come up with big achievements. So, my main goal was to enjoy the trip and the magnificent course.
I still knew Nice from 2009 and 2010, when I did the full distance Ironman and in 2010 actually got me a slot for Kona. All the better, to be able to get the best slices served without having to face the full 140.6 miles.
Despite me seeing with different eyes, the city, the type of event and the aspect of travel, there are still these magical moments:
The rising sun during the swim start, the view from the Col de Vence over the treeless mountain tops onto the Mediterranean Sea, and the blistering heat of the almost entirely exposed run course on the Promenade des Anglais. Triathlon leaves enough space for one’s own values.
My experience started with a set of well-seasoned and practiced pre-start routines. 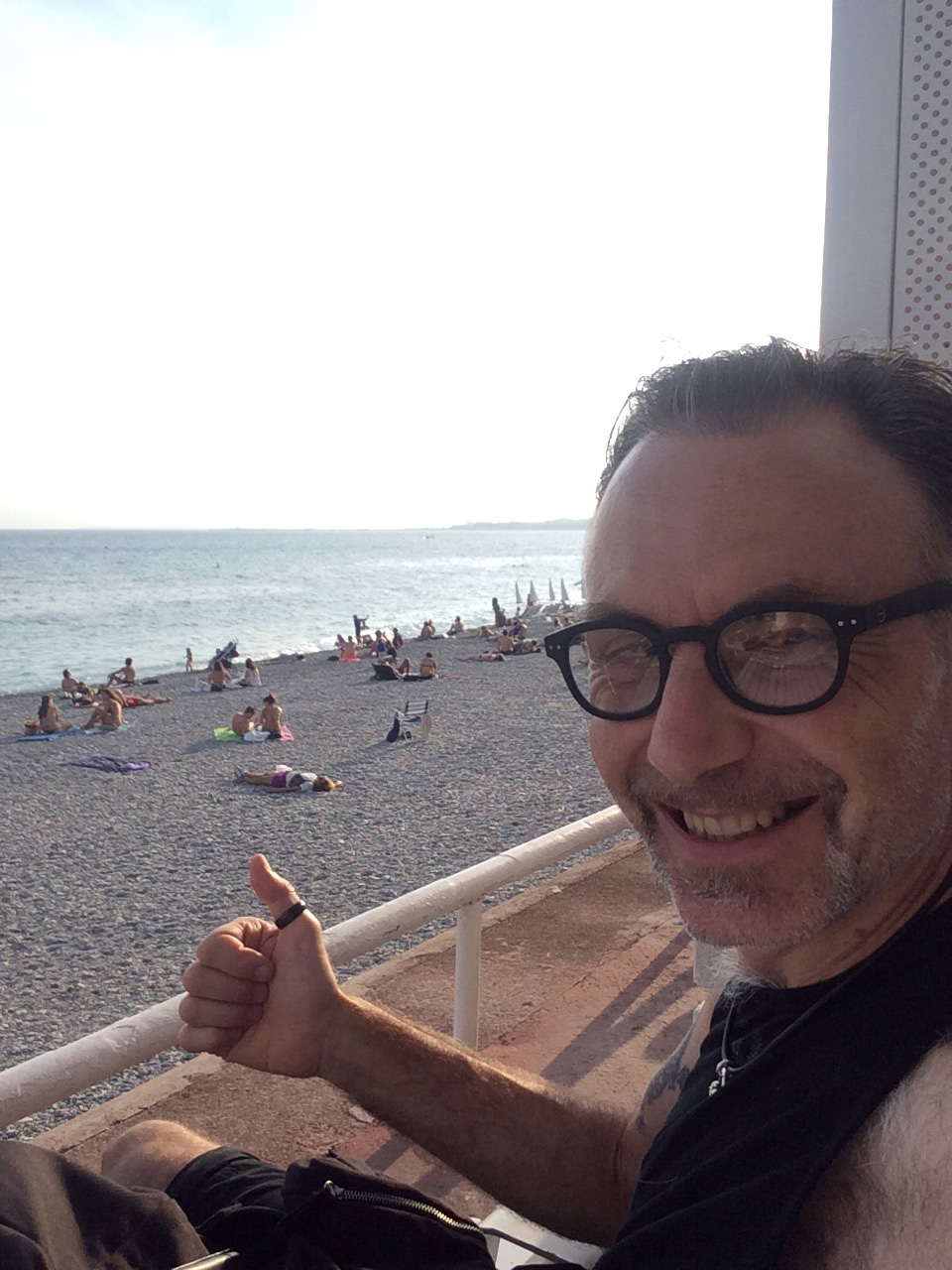 Fairly new to me was the rolling swim start. It takes out the stress but it also leaves me with no fast feet to hang on to.
My split time came out according to the little training that I had and having to play it safe as a consequence.
After a smooth transition followed the joyful cranking-up into the notorious bike split that determines the biggest part of the race’s character.
The course’s profile speaks a clear language:
A flat stretch to get to the hill, an ascent (1400 meters of climbing), a demanding descent, and a flat stretch back to Nice.
I sternly recommend the complete technical control over a bike in perfect mechanical order!
The descents are fierce, fast and additionally peppered by other participants who occasionally may be overestimating their skills.
As a reward, one gets the mind-movie of a blazing ride into the Alpes-Maritime.
My bike split came out with quite a respectable performance, in particular if I consider not having trained through the miles of life in a 10-speed chain.
My second transition could have certainly been faster but I took my time to cover my shoulders with sun screen to avoid damaging my skin in the baking conditions of powerful sunlight over the wind-blown tarmac.
The course takes one out to the airport and back, twice. There are lots of cheering spectators, aid stations every mile and the possibility to meet one’s limits.
A tailwind here means running at the verge of a heat stroke.
Racing up the second-best run split of my age group, I entered the canal to the finish line.
With so little training, there was no chance for catching a slot for next year’s Nice’s 70.3 World Championships. But my result as 10th of app. 120 of my age group 55-59 passes as a „well done“ for myself. 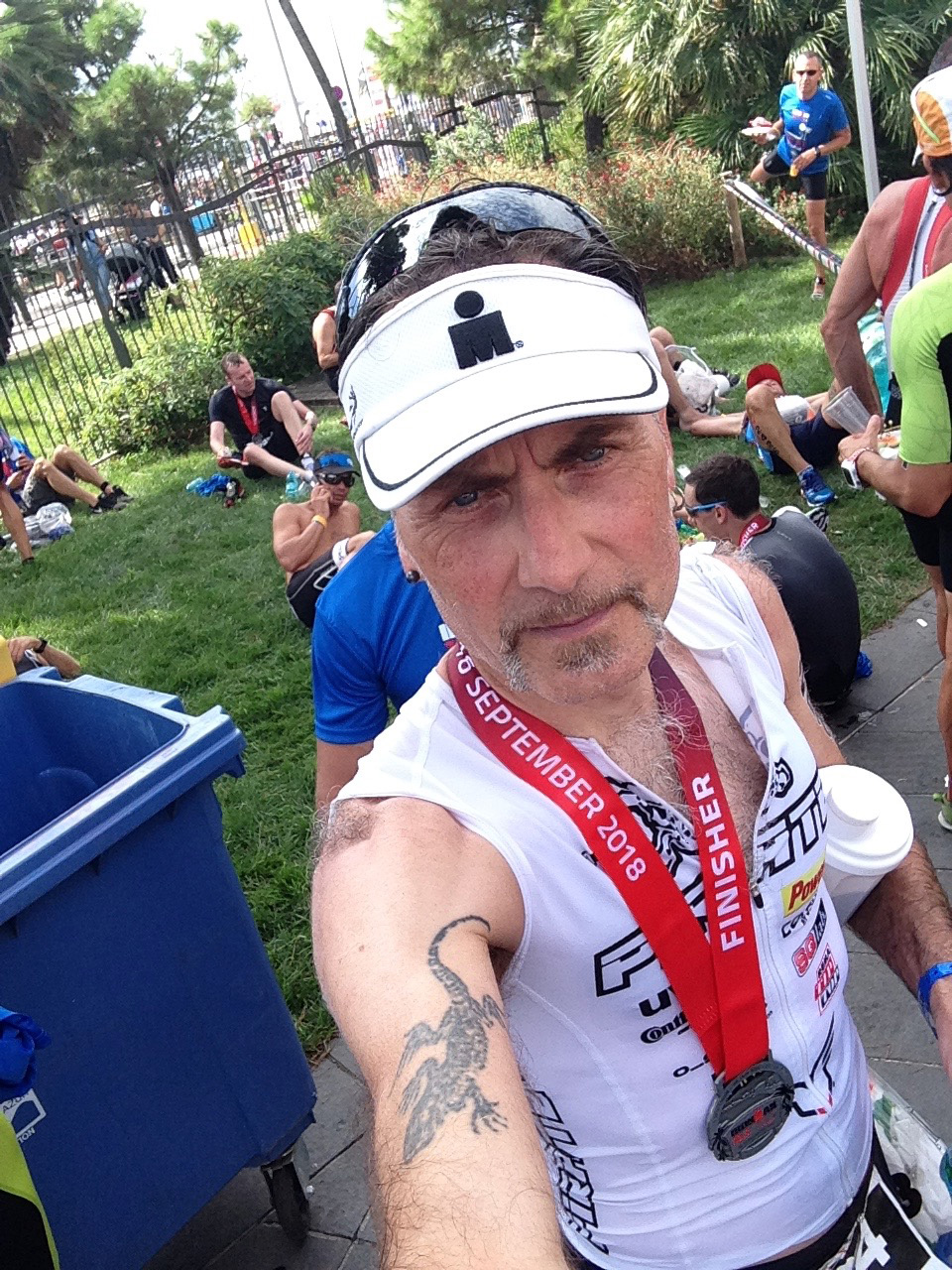 Topping it off with an interesting study in social sciences, I attended the Awards Party:
„It-ladies“, members of the Club Natation so-and-so, toting the latest Apple watches, Kors bags and trophy-husbands, were using WhatsApp to give their personal coaches the boot if the qualification for next year’s race had failed.
I sternly believe that Vogue-France will soon report about the beautifully rich and fit and which tri suits and which necessities are preferred.

For me, this race was a blast!
But I am having thoughts about the directions and the meaningfulness of this permutation of tourism.
Alex